2
footprints in the sand
her toes digging deeper
where he kissed her
--John McDonald
Votes:414**1 Points: 26
Comment:1 gorgeous celebration of romantic love.
Comment:2 Describing the kiss with this little detail of it is very compelling. Implying her standing tippy toe to reach up to kiss and also of them looking back at their footprints to see the spot where they stopped to kiss. Very nice.

19
evening beach
the tide washes away
his declaration of love
--Jacek Margolak POLAND
Votes:541*** Points: 17
Comment 1: It's sweet. Instead of characterizing what was washed away what about describing it, like 'our initials' then maybe something more suggestive in line 1.
Comment 2: Nice word play with 'hot' for both heat and for passion.

5
moving in
to my sand castle
the sea
--BILL KENNEY
Votes:431*** Points: 13
Comments: Metaphors that can also be taken literally I think work well in haiku.


3
Steps on the wet sand-
I still listen their rustling
in the shell from home.
-- Dan Iulian
Votes:*1**** Points: 2
Comments:I like the idea of reliving a visit to the shore by listening to the 'ocean' in the shell. I wonder about implying the listening to the shell instead of telling us, like... conch shell memento - in the surf's roar I still hear - our steps on wet sand.


4
Soft trickle of sand
from my fingers to her bossoms -
hot august day
--patrick druart
Votes:****** Points: 00
Comments: Nice word play with 'hot' for both heat and for passion.

6
drizzling on sand -
grandma's umbrella traces
small and shallow
--Cristina-Monica Moldoveanu, Romania
Votes:1*1*** Points: 4
Comments: I was lost for a while by "traces small and shallow" but now I think it means it traces a tightly overlapping circular spiral in the sand like the child's tracing toy, the spiral graph (a favorite of mine when I was a kid but I kept losing
those little tracing wheels:). Maybe it was just me but it was hard for me to get my head around this phrasing although a really interesting way to describe the gate of her walk.


7
sand, billows,
foam, shells and seagulls –
I am not nowhere...
--Patricia Lidia
Votes:****** Points:00
Comments: Ok, I'm not sure what the author's intention was but here's my interp of the haiku. A list of words in haiku tend to lose their meaning and so described to me here in lines 1 and 2 as some generic boring isolated shoreline but then line 3 contrasting this seemed like a revelation that it is in fact a beautiful and significant place which I thought worked very well. Also I normally shy away from abstract statements like in line 3 but I like the double negative and think the line achieves such a nice shift and insight that I like it the way it is.


8
beach restaurant
little piles of sand
underneath each table
--Marleen Hulst; The Netherlands
Votes:12**** Points: 05
Comments: An amusing image I had of piles from sand being emptied from shoes or just tracked in from the beach. This may just be my personal preference but to provide a little more shift from the call and response images, the fragment and the line, I was thinking of having the fragment at the end, of moving line 1 down to line 3 instead.

9
son's room
just a bit of sand
tells his day
--Ralf
Votes:3***** Points: 03
Comments: I like how this touches on what parents notice and how they can deduce so much about their children. Line 3 I wonder about using an implied meaning instead of telling us, like... her son's room - just a bit of beach sand - makes her smile.


10
full moon -
thousands of footsteps
in the beach sand
--Bouwe
Votes:13**** Points: 07
Comments: Nice image of the beach at night after everyone has left and before the wind and surf can wipe away all the footprints, like the lights were turned on revealing the night life:).


11
sand on sunny beach
dream at work on rainy day
this year vacation
-- Irena Szewczyk PL
Votes:****** Points: 00
Comment 2: Sounds like a good vacation:) I wanted to read it with more of a revelation from the vacation to the daydreaming, maybe imply the daydreaming instead, like...beach vacation - watching the sail boats go by - on line from my work


12
Mighty mountains -
now this soft sand whispering
in the quiet beach
--Juhani Tikkanen
Votes:**1*** Points: 03
Comment 1: The first one now will later be last! wisdom,pathos,delicacy
Comment 2: Nice linking the mountains to the beach sand. I think the contrast of "mighty" and "soft" achieve the link and that "now" gives too much away. "Whispering" and line 3 are very poetic but I wonder about a more haikuesque
reference instead.


13
crumpled ticket-
on bottom of the suitcase
grain of sand
--Krzysztof Kokot PL
Votes:23**** Points: 08
Comments: Nice images. I don't travel a lot so I wasn't sure what crumpling the ticket meant but I like the image, I assume that you had returned from a trip from the beach and had sand on the suitcase. I wonder about tweaking the phrasing a little, like.., crumpled ticket - little piles of beach sand - where the suitcase sat.


14
beach at night –
through the rooms of our sand castle
flits moonlight
--Ramona Linke, Germany
Votes:3***** Points: 03
Comments: Cool image, I like that the metaphor 'could' be taken literally but it's described more poetically and feels a little more imaginary or surreal than for haiku. Maybe more like... we talk into the night - the moonlit balcony - of our
sandcastle


15
dusk -
coated in sand
the mackerel’s last thrust
--Michael Andrew
Votes:21**** Points: 05
Comment: Nice first line with the end of the day juxtaposed to the end of the fish's life. Also the inclusion of the sand coating added a compelling visual detail which also explained the reason for it dying and where. I like that the death was described and not just stated.


16
summer's end
a wave knocks our last castle
back to sand
--Catherine J.S. Lee
Votes:31**** Points: 05
Comments: Nice. I like the thought that the sand is a castle when it's castle shaped and back to just sand when a pile. I want to read line one so I realize it's about the end of summer and not have to be told it. Like instead what about just
giving a late summer month like 'September' or even 'early fall' or 'Indian Summer'.


17
Precious memories
seep through our fingers – all lost
in the sands of time
--Richard Hill; Saitama, Japan
Votes:*1**** Points: 02
Comments: Very poetic and a classic metaphor. I wonder about using more concrete images and instead implying the metaphor.


18
deserted beach -
through the castle of sand
only the heat
-- Ailoaei CristinaBotosani City, Romanian
Votes:11**** Points: 03
Comments: I like the idea of there only being heat in the castle and no longer children's imaginations. I wonder for line 1 something that would describe an empty beach instead of stating it as one, like 'just the sound of gulls' or something.


20
sunset over the sea -
in her hair, his fingers
and sand
--Andrzej Dembonczyk, Silesia, Poland
Votes:13**** Points: 07
Comments: Interesting, although the structure is fragment line I read it as line fragment with the shift in line 3 find also sand in the hair, an nice detail and seemingly out of place.


21
thunders -
the castles of sand
fall into ruin
--Cezar-Florin Ciobîca
Votes:321*** Points: 10
Comments: Poetic. It feels a little too metaphoric and imaginary. I want to read it more


22
Back from the beach.
Sand on the hem
and good memories.
-- Franklin Magalhães; Rio de Janeiro
Votes:2***** Points: 02
Comments: I like the hem reference, I might have said cuff instead. Line 3 I want to read something more concrete and not categorized like, 'and still smiling'

Received After Voting Had Started 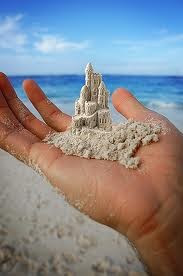 
The THEME is sand

much love
gillena
Posted by Gillena Cox at 11:51 AM No comments: