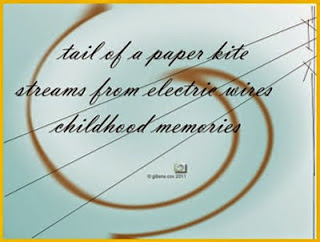 April breezes are right for kite flying in open spaces like the Queen Park Savannah here in Portof Spain, however most first time kite flyers were school yard flyers or back yard flyers, and here in Trinidad and Tobago, many an adult flyer, reminsces about the good ole days of the 'chookie chong' , which is a kite made from notebook paper with a tail also made from notebook paper, the simplest kind of kite to make, and the first kite children learned to fly...

Dear (kuyu) haiku friends, you are invited to participate in The Caribbean Kigo Fiftieth Kukai. A KIGO(season word) is given - 'kite'. You must use the word 'kite' in your haiku. Send one haiku, written in the style of your choice; via e-mail

The results will be published here at Caribbean Kigo Kukai. After results have been posted, any comments
you wish to make can be posted directly here at the blog just click on comments at the end of the post

much love
gillena
Posted by Gillena Cox at 8:17 AM