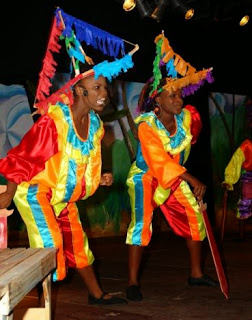 Dear (kuyu) haiku friends, This July our fifty-second kukai.
I have proposed word play as the theme . Since 'word play ' is a theme you can write about it, without using the exact term as given. Send one haiku, written in the style of your choice; via e-mail Have fun, be creative. Enjoy!

Drag Yuh Bow
An interesting folk custom, here in Trinidad and Tobago, more frequent seen nowadays at carnival time, as an icon of traditional mas; but also also very much so prominent in staged folk productions;
is the Tobago speech band. The Speech Bands are most present at The Tobago Heritage Festival, first staged in 1987; It spans a two-week period from mid-July to August, an annual event. The players in A Tobago Speech Band wear ruffled shirts, flamboyant coloured satin pantaloons, stockings, and wire hats, or cork hats ornate with coloured paper streamers, the hats look like ships. Face masques are usually of wire mesh. Their traditional footwear are alpagartas but its not unlikely to see a present day character wearing sandals. They carry sticks which represent swords of Admirals past, in the history of the island. Characters dance a stacco marching movement to background drums and fiddle, criss crossing each other on stage. Out of the march a challenger emerges, goes to the microphone and chants "Drag yuh bow, Mr. Fiddler." the music subsides briefly, and a question is posed. Questions may be of a social and political or even personal nature. and the expectation is that after replying; in return a similar question will be flung back. The music returns in cresendo, after each oration. Questions and answers are commonly posed in comic rhyme so that audiences are throw into fits of laughter. Special to this tradition are the dialect of Tobagonians spiced with a Scottish brouge influenced from land overseers and church missionaries from the nineteenth century; and, the background music of fiddle, flute, and tambrins; a combined harmony of African and British folk rhythms molded to produce a new Tobago sound."(text first published at Sketchbook 4/3 09)

Comments during voting are encouraged but must be limited to 3 lines. When
published, these comments and votes will be given anonymous listings.
Ballots:(votes and comments) to be sent by e-mail to

The results will be published here at Caribbean Kigo Kukai. After results have been posted, any
comments you wish to make can be posted directly here at the blog just click on comments at the end of the post