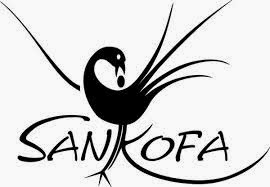 The Sankofa symbol has been adopted as an important symbol in the African Diaspora to represent the need to reflect on the past to build a successful future. It is one of the most widely dispersed adinkra symbols, appearing in modern jewelry, tattoos, and clothing.
In Trinidad and Tobago, August 1st is observed and celebrated as Emancipation Day, a time of keen focus into the history and development of African heritage in our society.

Dear haiku friends, This is our fifty-third kukai.
I propose reflection as the theme - (reflection as it relates to the past in building successful futures. Since 'reflection ' is a theme you can write about it, without using the exact word as given. Send your one haiku, written in the style of your choice; via e-mail Have fun, be creative. Enjoy!

Comments during voting are encouraged but must be limited to 3 lines. When
published, these comments and votes will be given anonymous listings.
Ballots:(votes and comments) to be sent by e-mail to

The results will be published here at Caribbean Kigo Kukai. After results have been posted, any
comments you wish to make can be posted directly here at the blog just click on comments at the end of the post

much love
gillena
Posted by Gillena Cox at 12:13 AM