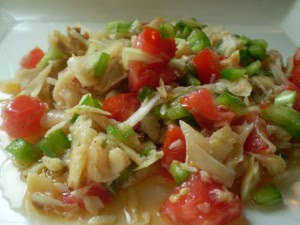 
The Kigo is salted fish

Send one haiku which includes salted fish e-mail to

(in Trinidad and Tobago we use the term 'saltfish' in conversations; salted cod [salt fish] was once considered the poor man's dish, having had a history of being food for slaves; not so now, its pricey and available in all the supermarkets, an all time favorite for a variety of recipes; accras and buljol are two very popular ones). Saltfish is even more popular in the Lenten Season.

Comments during voting are encouraged but must be limited to 3 lines; when published these comments and votes

will be given anonymous listings.

Ballots: (votes and comments) to be sent to e-mail to

much love
gillena
Posted by Gillena Cox at 8:18 AM